Explore your potential through the study of chemistry. 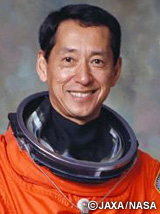 I flew on a Space Shuttle mission and conducted a number of space experiments with NASA astronauts over eight days from September 12 to 20, 1992. It was not only the realization of my childhood dream to become an astronaut but also a once-in-lifetime opportunity to test my ability as an experimental chemist. We performed the first extensive space experiments in the Space Lab in line with the 43 experimental themes proposed by researchers from Japan and the United States.
The Space Lab was a new type laboratory designed to carry out experiments that are unrealizable on Earth. Zero-gravity means there is no suspended sedimentation caused by differences in specific gravity, no thermal convection, or no hydrostatic pressure. It is not required to keep samples in containers for experiments. Making the best of these zero-gravity conditions, new experiments that scientists are unable to perform on Earth can be realized. Based on careful preparation over a long period of time by researchers from a variety of fields we produced compound semiconductors, superconductors, alloys, ceramics, composites, proteins, high-purity glass and other materials and examined their properties. We also attempted to clarify the basic processes of physical phenomena, such as crystal growth and diffusion, and chemical reactions, such as oxidation-reduction. And finally, we found a clue to the longstanding questions that many people had about whether it is possible for life to survive in space, and whether it is possible for new lives to be born in space.
I am a chemical engineering technician and I implemented these experiments in space for researchers on Earth. We have to test our bodies as the subjects of human experimentation. You may regard us as a new type of scientist capable of dealing with any challenge. Fortunately, I was among the first group of people who were assigned to this work. Thanks to support from many people, we were able to achieve more than expected. I consider this to be attributable to the basic academic skills I have acquired that can be applied to any field. I started to develop these skills when I was in high school, with the goal of studying chemistry at Hokkaido University. At the Department of Chemistry, students are provided with opportunities to be involved in many interdisciplinary fields and to meet many people. Such experiences will surely help students who choose to pursue the study of chemistry take a further step towards a successful future.