Research in the field of inorganic solid-state chemistry has long focused on compounds containing transition metals with unpaired electrons in the 3d orbital. Particular attention has recently been paid to those with exotic physical properties (such as high-temperature superconductivity and giant magnetoresistance), and rigorous research is under way on such compounds. However, many aspects of the physical properties of compounds containing 4d or 5d transition metals are yet to be elucidated.

Against such a background, the laboratory focuses on compounds containing both 4d (5d) transitional metals and rare-earth elements (4f-electron systems) to elucidate the various physical properties of these substance groups and to explore/develop substance groups with novel and interesting physical properties. To this end, laboratory members engage in the exploration, synthesis and physical property evaluation of novel complex oxides and chalcogenides. The outcomes have revealed that mutual magnetic interaction among platinum-group element oxides occurs between d-electrons of platinum group elements and f-electrons of rare-earth elements, resulting in various interesting forms of magnetic behavior.

Neutron diffraction experiments are also conducted on these compounds for magnetic structure analysis using a research reactor (JRR-3) at the Japan Atomic Energy Agency (JAEA). These research activities are also implemented as a collaborative effort with research institutions outside HU, such as the JAEA Tokai Research and Development Center and Tohoku University’s Institute for Materials Research. 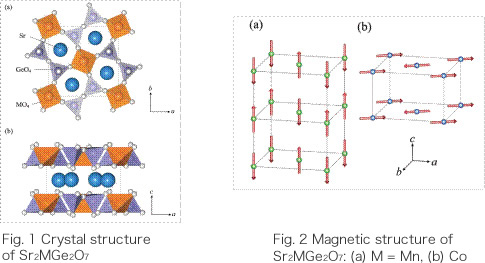 Oxides with a melilite structure A2MM’2O7 (A = Sr, Eu; M = transition metals; M’ = Si, Ge) have two-dimensional arrays of transition metal ions and resultant low-dimensional magnetic properties. The introduction of divalent europium with 4f-electrons in the A-site led to the discovery of Eu2MnSi2O7 as the first compound showing ferrimagnetism to be found in this system. To gain insights into magnetic interaction between transition metal sites, a variety of physical property measurements and neutron diffraction experiments on Sr2MSi2O7 (M = Mn, Co) were also implemented, revealing a characteristic magnetic structure that reflects the magnetic anisotropy of transition metal ions. 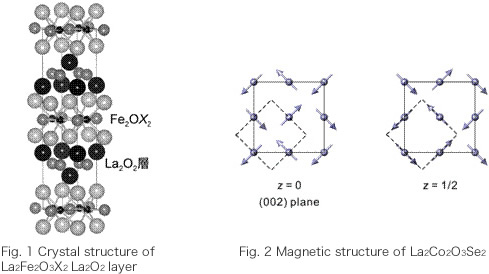 Novel layered oxyselenide containing transition metals Ln2M2O3Se2 (Ln = lanthanide; M = Fe, Co) was synthesized to determine the nature of its crystal structure and ascertain related properties including those of magnetism, specific heat and neutron diffraction. In this group of compounds, the magnetic moments of the transition metals showed two-dimensional antiferromagnetic behavior. It was also found that the group exhibits long-range magnetic order at low temperatures, and the magnetic structure was determined. It was revealed in particular that the Ln2Co2O3Se2 had a unique magnetic structure in which nearest-neighbor magnetic moments are mutually orthogonal.

6H-perovskite-type ruthenium oxides Ba3LnRu2O9 (Ln = lanthanides) have a crystal structure in which face-sharing octahedra that are occupied by Ru ions form Ru2O9 dimers. It was found that these compounds show various magnetic orders at low temperatures depending on the rare-earth elements they contain. 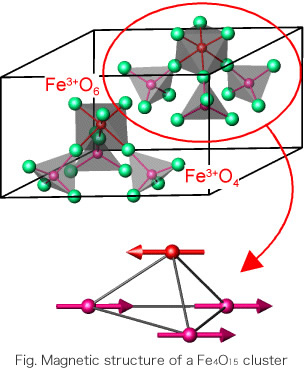 Transition metal oxides containing rare-earth elements were synthesized to investigate their magnetic characteristics based on the measurement of properties such as magnetism, specific heat, Mössbauer spectroscopy and neutron diffraction. It was found that transition metals in these groups of compounds form ferrimagnetic tetrahedral clusters that interact magnetically. 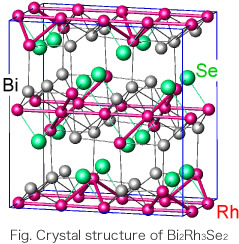 The laboratory succeeded in synthesizing ternary metal-rich chalcogenides with two-dimensional sheet of transition metals and found that these chalcogenides exhibit superconducting transition at low temperatures. In particular, compounds containing rhodium as a transition metal show not only superconducting transition at 1 K but also another anomaly near room temperature. The results of our research revealed that this anomaly is caused by the formation of charge density wave (CDW).